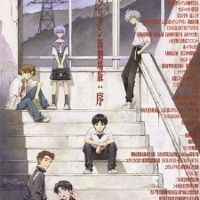 After the second impact, all that remains of Japan is Tokyo-3, a city thatâs being attacked by giant creatures that seek to eradicate the human kind, called Angels. After not seeing his father for more than eight years, Shinji Ikari receives a phone call, in which he is told to urgently come to the NERV Headquarters, an organization that deals with the destruction of the Angels through the use of giant mechs called Evas.Shinjiâs objective is to pilot the Eva Unit 01,while teaming up with the Eva Unit 00 pilot, Ayanami Rei.

The first of 4 movies that retells the anime story of 1996.
The director Hideaki Anno affirms that everything remembers its old home, studio GAINAX, when he counts on creating a new and brought up to date Evangelion. The film has in the production veteran that had worked in the original Evangelion and other new talents, and the director suggests that this will go to exceed the success of the series.

Anno is responsible for writting and adaptation for the cinema version. Remembering that it will have surprises for who knows the series well original: new personages, new EVAs and a different end.
(Source: MAL)