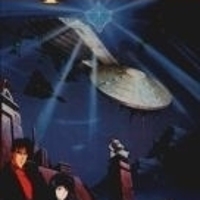 In times of olde, God gave mankind the ten commandments, and a message that has been lost to the centuries. In the present, Koichiro Kamishiro is a modern day Indiana Jones who scours (and often destroys) ruins for hints of the past, until one day he runs across a box filled with two crystal triangles. Having inadvertently run across the key to Godâs lost message, Kamishiro suddenly has a lot to deal with including assassination attempts by the KGB and the CIA, aliens hell-bent on destroying the Earth and the love of several women!(Source: MAL)