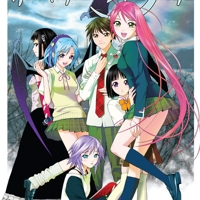 Tsukune is just beginning high school. Devastated he cannot move on, his father gets him into a school no one has heard of, by âPicking up an admission formâ from a man who dropped it in the street. The first day he arrives, he discovers the number one school rule. âNo Humansâ. Of course, things turn out pretty interesting and he ends up being followed by a rather cute female vampire.

Moka, the absolute cutie of a female vampire, feeds off the blood of the living. And of course, right when Tsukune meets her, he ends up sniffing her hair â a bit creepy, but itâs obvious he has little experience with women. Cue a nosebleed, bloodsucking of the neck, and a tiny hicky as proof. Sheâs a first-year student like Tsukune and ends up in the same classes with him.