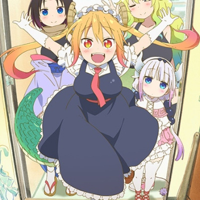 One morning, as office worker Kobayashi gets ready for another day at work, she is greeted by a terrifying sightâthe head of a large dragon staring into her eyes from across the balcony. The dragon immediately transforms into a cute, busty and energetic young girl in a maid outfit, who introduces herself as Tohru.

It turns out that during a drunken excursion to the mountains the day before after a long day, this typically stoic office worker encountered the dragon, who claims to have come from another world. Having no place to stay, Kobayashi offers to let the dragon stay at her home. In a perfect example of how good deeds are rewarded, Tohru decides to repay her kindness by working as her personal maid. Despite initial reluctance, a mix of guilt and Tohruâs dragon abilities convinces Kobayashi to accept her.

However, despite being extremely efficient at housework, Tohruâs unorthodox methods of housekeeping often end up scaring Kobayashi and bringing more trouble than help. Moreover, the reason behind the dragonâs arrival on Earth may be more complicated than it seems, as Tohru carries a troubled past. On top of it all, Tohruâs presence ends up attracting other mythical beings to her new home, bringing in a new host of eccentric personalities. Although Kobayashi is trying her best to adjust to the crazy situation that is unfolding, nothing has prepared her for this new life with a dragon maid.

Amazon
Anime Rating
8.9/10
4259 users added this.
Similar in these categories.

Asu no Yoichi!
Watched By
Comments
Please login to post.